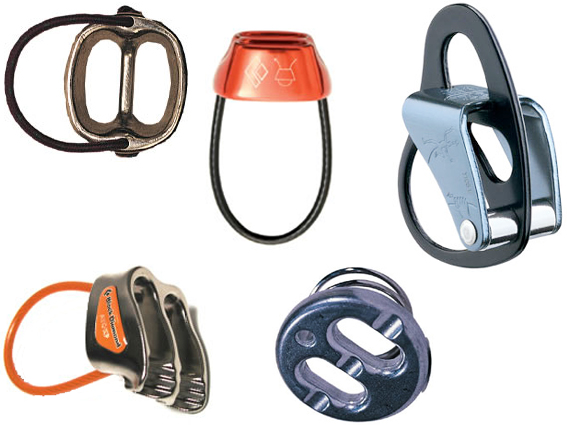 When you are new to the climbing world, you may have heard climbing equipment called a belay device. Because there were so many new things that you had to learn about rock climbing, you may found yourself went along with the guide and tried to soak in as much as possible. 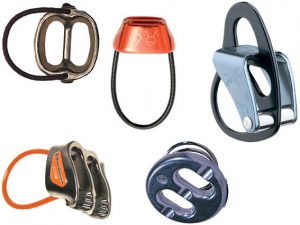 However, when you left only a few things may stuck such as climbing shoes and harnesses therefore a belay device may be forgotten. That was what happened to me when I first learned to climb.

In this article we will refresh your memory and go over what is a belay device, how does it benefit you, the different types for your needs, and my final thoughts of belay devices.

A belay device is small mechanical climbing equipment made out of aluminum or an alloy. It is definitely required equipment to rock climb safely. The primary function of a belay device is to act as a friction brake mechanism for rock climbing. When a climber falls, the fall is brought to a quick stop. Some belay devices can also be used as a descender for controlled descent on the rope such as rappelling.

A belay device benefits climbers in many ways. It serves as a management equipment in assisting a belayer who could be smaller and lighter to easily manage the fall of a heavier climbing partner with minimal physical effort. It also allows the belayer to slowly lower the climber to the ground safely.

There are several types of belay devices that serves different functions and benefits. Some belay devices assist the belayer into an assisted braking mechanism while others for DIY (do it yourself) personality requires locking or braking the rope manually.

One type of belay device is called a tubular device or also known as ATC (Air Traffic Controller). The shape is generally tubular or rectangular. ATC is a named equipment given by Black Diamond debuted in 1993 and designed by Chuck Brainerd. ATC caught on and became a well-known name in place of tubular belay device such as Tabasco for hot sauce. 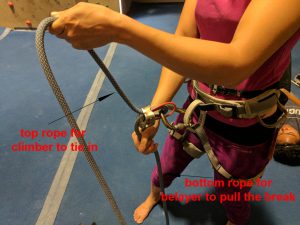 The ATC tubular device is the most popular of belay devices being used today. It was an improvement over the plate devices such as the stitch plate. This device could move down and lock against the carabiner with more surface area to dissipate heat from the rubbing of the rope and has greater stopping power. The ATC can also be used for rappelling.

There are three different styles of tubular devices. All of these devices have two holes which are for using two ropes at once. The two ropes are common in multi-pitch sport, trad, and/or alpine climbing. For sport climbing, we use only one hole. You may wonder which hole to use. It’s usually a differentiation between the left hand or right-hand belayer. You use the hole that is closest to your favorite hand.

These belay devices are self-locking brakes. Here are three styles:

An assisted-braking belay device is a mechanical device that assisted a belayer in braking. There is a special camming mechanism built within a belay device. This mechanism is engaged when a sudden load or force is stressed on the rope and pulls belay carabiner into a pinch point and lockdown on the rope from passing through the belay device.

The advantages of the assisted-braking devices are easier to help the belayer to stop the climber’s fall, feed the rope through smoothly, and easier to lower the climber with control. The disadvantages are sometimes it is heavier than the standard belay device depending on the style, may not work with all size ropes depending on the diameter, allow only one rope for some styles, and sometimes get locked up making it difficult to use as a lowering device. Here are several styles:

The auto-belay device is designed for climbers to sport climb without a belayer. These devices are used and popular among climbing gyms. It is an incentive for climbers to learn how to climb without having a climbing partner. The auto-belay device runs of different mechanisms such as hydraulics, magnetic or centrifugal force braking technology, and friction.

The most common setup on auto belays are the spring-loaded center spool with a long lanyard (replace the climbing rope) tightly coiled and retraction spring winds the lanyard in as you climb. The magnetic or the centrifugal force braking technology catches your fall and provides the resistance to slow your fall to a controlled comfortable descent.

Auto belay devices are great for climbing alone, practices climbing laps, and/or work on techniques. However, I still prefer climbing with a partner if there is one. I like the company of a friend and also I do not have to start over from the bottom every time I fall off a project route. A project route is a challenging route that requires multiple climbs to learn how to send to the top in one continuous climb without falling.

My current favorite belay device is tubular with ridges. However, I do have other belay devices such as the standard tubular and the Grigri for certain situations.

On days climbing in the gym when there’s too much humidity, the ropes usually swell up very fat. This creates friction when I use my ridge tubular. I would prefer using the standard tubular for easier belay. I occasionally use the Grigri on the top rope during long belay sessions when I belay my husband. He is heavier than me. The assisted-brake locks the rope much tighter while he takes breaks and allows me to lower him with ease. When I lead climb indoor or outdoor, I prefer to use the ridge tubular because that is a belay device I am most comfortable with.

In conclusion, if you are just starting out and climbing in a gym for fun, I would rent the standard tubular belay device to try it out. Belay devices on the average costs from $17.95 to $99.95 varying on the types, brand names, and styles. As you become more familiar with climbing and would like to pursue lead climbing or climb more often, invest yourself in a tubular device with ridges and/or possibly a Grigri depending on the type of climbing you would like to challenge yourself. Also, remember Grigri is not accepted at some gyms. It is important to learn how to use Grigri properly and find out if your gym will allow it.

I hope to have refreshed your memory and perhaps picked up a thing or two about belay devices after reading this article. If there are questions or information you would like to share, please leave me comments below.